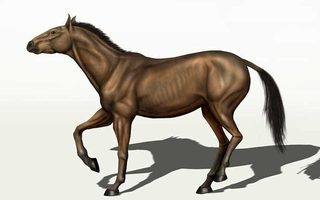 Equus conversidens
A 700,000 year old horse fossil discovered in the Yukon Territory has yielded the oldest DNA ever decoded, according to Western Dig, a website devoted to the Ancient West. (Who knew there was such a site? I'm almost as excited about that as I am about the horse bones!)
The findings allowed scientists to date the shared ancestor or all equines (horses, donkeys and zebras) back 4 million years. Previously this ancestor had thought to date to 2 million years ago. Comparison between modern horse DNA, the Przewalski Horse, and a previous fossil, allowed them to establish a "molecular clock"--no, I don't understand this, but I appreciate it.
The article contains a link to another, which finds that humans in Oregon lived in the at the same time as a "stocky-legged" horse. Remains of both were found in caves. The paleontologist who examined the bones, Brianna McHorse (really!) believes that further analysis may help us understand if there were many types of horse in North America fourteen thousand years ago, or just a couple.
I'm curious about that, but also about the cave itself, and the Paleo-Indians who may have lived in it. I have always wondered about the meaning of the legend, which I think is widespread among American Indians, that their ancestors came out of a hole in the ground. Is this an ancestral memory of cave-dwelling? Or did the so-called "ice-free corridor" feel like living in a hole? Or what?
Somebody, build a time machine. Please!
Be the first to comment