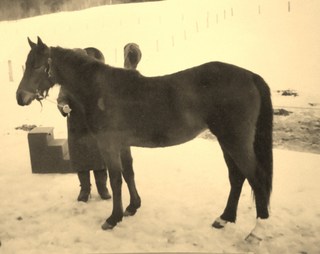 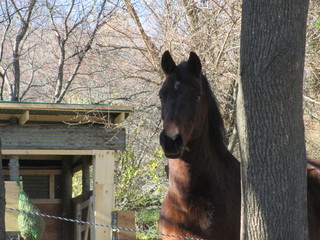 Tags: Jessie Haas, Robin, Morgan horses, children's horse books, writing
Riding season is about over for me. I've gone from obsessed, and starting every day with a ride, to having to push myself to squeeze one in. In part I'm transitioning by writing a story that features a horse almost identical to Robin--so I'm still obsessed, just not getting as much exercise!
Be the first to comment

Who's Confused, Me or the Horse?

Tags: clicker training, horse training, Morgan horses, Jessie Haas
Trying to teach Robin to leg yield. To the right, no problem. To the left, not possible. I read my books (Mary Wanless, Sally Swift, everyone!), worked on my position, agonized. I also, in the barn, asked her to sidestep away from my hand on both sides. Click, treat, nicker. She was definitely less  Read More
Be the first to comment

Tags: Jessie Haas, Bramble and Maggie, children's books, easy readers, horses, Morgan horses
When I began BRAMBLE AND MAGGIE, now the first in a three-book series, I was just getting to know my new horse Robin. She most definitely had her "little ways." An unbroken three-year-old, Robin "didn't think poorly of herself," in the words of Cheryl Rivers, who bred her. I was heartbroken at losing Atherton,  Read More
Be the first to comment

Tags: Robin, Morgan horses, clicker training, Candlewick, Feiwel and Friends, Chico's Challenge
Wow! It's November already. I've checked off a book about a Quarter Horse--CHICO'S CHALLENGE will come out with Feiwel and Friends in early 2012, I think--a new Bramble and Maggie book for Candlewick, and I've substantially finished a book about the Westminster Massacre that will come out with History Press next year.
And Robin? The  Read More
2 Comments

Hi Jessie: looks like you've been riding more than writing these days! Always tough choices, for sure. i just read and loved your book Chase. You can see my blog post about it here http://bluburro.wordpress.com/2012/05/23/hunted-or-hunter/ i'm on my first horse-based YA novel now too, and trying to train Hazel, a half-Fjord, tho my horse at work is a great little Morgan we call Bug. Hope to read more YA from you soon--

To Claim Your Prize

Tags: horse crazy, Jessie Haas, Morgan horses, clicker training
If you responded to Win A Prize (and I Know Molly did!), please send me your mailing address so I can send you your pin. The glitch here is that this blog--set up by the Authors Guild--doesn't show me your email address, so I can't respond to you directly. I'm not Ms. Technology, so  Read More
Be the first to comment

Tags: children's books, horse training, clicker training, Morgan horses, Jessie Haas
Robin and I still have our persistent problem of her biting me, or threatening to. I can't decide if it's compulsive--oral Morgan who must be always doing something with her mouth--or if it's something I'm actually training her to do due to my response (but I feel like I have to respond to protect  Read More
Be the first to comment

Tags: children's books, horse training, clicker training, Morgan horses
Just back from Clicker Expo in Lexington, KY--a wonderful experience. Imagine being in a resort hotel with 400 animal-lovers and 130 well-behaved dogs of all breeds. Imagine classes all day on the latest scientific breakthroughs and refinements in modern animal training. I learned a lot about keeping cues and training loops clean--which coincidentally is what I  Read More
Be the first to comment

Tags: clicker training, horse crazy, Jessie Haas, Morgan horses
Okay, here's a challenge for clicker trainers. I've been a bad blogger--look how long it's been. Do I call myself a bad blogger, or do I give myself a tiny treat for getting back into the saddle?
A few excuses; extensive barn renovations, followed by winter, Christmas, more winter...naah, no excuses. Robin is  Read More
1 Comments

That sounds like a great idea, although I'm not sure if you meant teaching kids to train dogs with a clicker, or training kids to behave by using a clicker. Either way, it's a great idea. Positive reinforcement is the only way to go as far as I'm concerned. One click of the clicker, and my dogs are at attention.